An interview with Mr. Radovan Žerjav

In the interview, Mr. Žerjav answers various questions, most of which concern the situation in the company Var, which he has been managing  since March this year. He remains optimistic despite the crises caused by the epidemic. Management and owners are determined to try to get through this period without layoffs. Mr. Žerjav has a lot of experience in management and organization. When asked how his job at Var came about in the first place, he answers that it happened by coincidence after talking to the owners. After leaving politics, he got a job in Austria where he stayed for 6 years. Although the Austrian labor market is often idealized, he was disappointed in many things, particularly in the area of ​​employer-employee relations. That is why he decided to continue his career in Slovenia. He made this decision despite realizing that a politician’s backpack can never really be put down. Regarding the planned relocation of Var to the Mele industrial zone, he tells that despite the crisis, we are intensively preparing to make this investment, as the current location does not allow us to develop. The new factory will be constructed as much as possible in the direction of Industry 4.0, that is in the direction of robotics, automation and digitalization. He believes that the government’s crisis measures to help the economy were a step in the right direction and that they prevented many black scenarios. However, we cannot just wait for what the government will do for us, but we must help ourselves. That is why we also started looking for new customers more intensively. The journalist also touches on one of the most important events in his political past, when he, as Minister of Transport, opened the long-awaited Pomurje motorway. After that the industrial zones have become very attractive, and they have also brought good staff to companies. 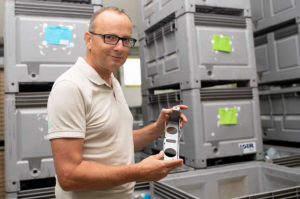