An article in the online newspaper Vestnik

In March, when coronavirus caused quite uncertain times, Mr. Radovan Žerjav took over the management of VAR. A few months ago an article on this topic was published in the online newspaper Vestnik (https://vestnik.si/clanek/aktualno/radovan-zerjav-prevzel-vodenje-vara-766614).

Mr. Žerjav, a master of chemical technology, is experienced in economics and politics. Prior to entering politics in 2007, he held leading positions in companies Nafta Lendava, Nafta Petrochem and Nafta Biodizel. To the public he is known as a former Minister of Economy and a former President of SLS political party. In 2013 he retired from political life. After that, he worked for the Austrian corporation Christof Industries for 6 years.

In his opinion Var is a well-organized company, but not well known to the public. Managing this company presents a special challenge for him. Despite uncertain times, the company will continue its efforts to build a new company building in the Mele industrial zone. 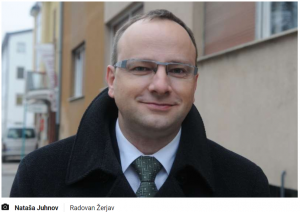